"THE RETURN OF LOST INNOCENCE" 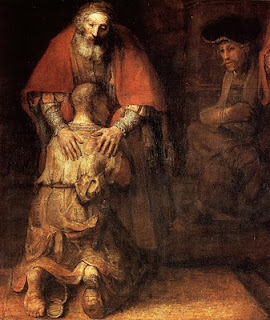 THE RETURN OF THE PRODIGAL SON BY REMBRANDT

I am nearing the end of a very blessed time in Australia.
I have spoken in many different schools in Sydney, Brisbane,
Tasmania and Melbourne. One incident which particularly
touched me was at a school in Sydney where after the talk two
fifteen year old boys approached me seperately. They had both
had parents who had divorced and when they were listening to
my story and heard that I had been through similar pain to
to their own, God had really spoken to their hearts not to
give up on life or to stop loving.

Another thing that sometimes surprises me is that no matter what
age children are God can come to them and show them his love.
I spoke in a primary school (which is a little unusual for
me because I normally speak to the older kids) and one of the
young children began to cry during my talk, at first the teachers
were concerned that something was wrong with him, but it turned
out he experienced God's love for him in a deep way and they
were tears of joy

I spoke at a mens conference at a retreat centre overlooking a
beautiful beach in Sydney. One man told me that he hadn't been
to confession for many years and during the conference he approached
a priest and went to confession and got rid of all the burdens he
was carrying in his heart. He shared with me that it was only
when he came out of confession that he noticed the beauty of his
surroundings and the view took his breath away. He knew that God
was showing him that after confession we truly start again and
are renewed in his grace and restored to childlike innocence.
It reminded me of the first confession I had made when I was twenty
seven years old after which I could hear the birds singing and feel
the wind on my face and everything seemed different because I was
reunited with God.

One of the things that I have felt that God has been showing me is
to really love the Church, because it is Christs Church even though
it is made up of human beings who are not perfect, it is still
Gods gift to us to show us the sure way to follow him in this life.
I had the privilege of taking part in some events with ecumenical
communities here in Australia and it is surely the desire of Christs
heart that all christians would be one. But I feel that it is very
important that we not lose our Catholic identity and not be afraid
to witness to the power of the Sacraments and Our Lady's intercession
in our lives.

Over the last few weeks I have been travelling a lot and constantly
giving talks and it can get a bit tiring. One night I was thinking about
this and I remembered there was a Christian musician from America
called Rich Mullins and he was someone who gave of himself tirelessly
to serve God, and he once said "unless we are falling into bed exhausted
each night trying to bring souls to God what right do we have to call
ourselves Christians" and it just reminded me that even in the difficulties
it is an incredble blessing to be able work for the Lord.

Just to let you know that you are in my heart and in my prayers, please
keep me in yours.