GOD'S LIGHT CAN BREAK INTO OUR DARKNESS 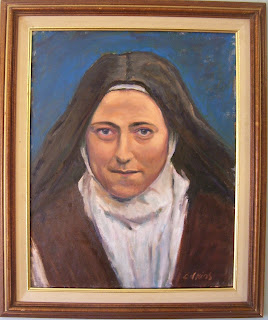 A few weeks ago I was running a Parish mission in
Glenties in Co. Donegal. On the Tuesday night I gave
the talk on confession and then I left the Church early
because I had to be in Knock that same night. I had parked
my car in Fr Shane's driveway to make a quick getaway.
But when I got to the driveway it was full with the cars
of the priests who had come to hear confessions. Instead
of waiting patiently until the end of the service I made the
mistake of trying to drive across Fr Shane's lawn to slip
out a little gap that was there, to my horror my cars
wheels became deeply embedded in the turf and after
much wheel spinning  it became clear I was going to
need help to get out. In the end it escalated into about
10 strong blokes and a tow rope attached to another
car being used to get me out. Of course these men had
a great laugh at my expense, and rightly so.

As I was driving to knock after this episode I was thinking
how the whole situation reminded me of what the results
of sin are in our lives. First we go off the path God has planned
for us thinking that we know a better way and then when it is
too late to turn back we find ourselves completely bogged down
in our sin and unable to escape on our own strength. It is then
that we reach out for help and Jesus is always there to not only
forgive us but to put us back on the right path when we turn to
him in the Sacrament of reconciliation.

Of course the car had left a couple of massive holes in Fr Shane's
lawn, which I felt bad about, when I apologised to him he laughed
and told me he was now thinking of turning the holes into a fish
pond.

Last week I went to Waterford to speak in the De La Salle School
and the RE teacher Dermot managed to put 500 young people together
for the talk and it was so refreshing to see their openness. Afterwards
I received some beautiful emails expressing how some of the students
were going to return to mass and really try to make God an important
part of their lives.

One thing that I have noticed more and more lately is that God can
reach out and touch lives at a very young age, recently a teenage
girl called Sarah came to stay with us for a week to do her work
experience from school. Five years ago she came to one of the
Masses at a retreat we we doing in her Church, even though she
was only ten years of age, she felt a deep sense of Our Lady's
love for her and not only did it transform her own life but her
whole family have come alive in their faith. She is fearless for
God and has spoken in Churches all over Ireland and she is
not yet sixteen, to me that is amazing!

Whenever we truly meet the love of God, he changes us and
he shines his light into our darkness, to those places where
we don't feel we can be loved. I used to be addicted to
gambling, but seven years ago I made a promise to God never
to gamble again. I had a priest offer up a Mass for this
intention and even presented my promise at the offertory.
Four years after this I was giving talks in Phoenix, Arizona,
and not far from Phoenix is Las Vegas, the gambling capital
of the world. A thought came to me "You've overcome gambling,
why not go and visit Las Vegas?" Looking back I know that thought
wasn't from God. When I got to Vegas I lasted about half a day but
then I blew $200 dollars on a roullette table, and to justify my sin I
gave the croupier a miraculous medal and said to myself that's why
I came to this place. Then I felt God say to me "who are you trying
to kid?"

I felt absolutely devastated at this betrayal of God and breaking the
promise I had made to him. So I found a Catholic Church and I knelt
down before a statue of Our Lady and said to her that I was going
to pray a rosary to make up for my wretchedness, but I felt her
say "NO, Let me pray over You!" Then I felt she reached into my
heart and touched the place where no one else knows about and I
don't want anyone to see, the place which I would hide even from
myself and she showed me in a deeper way than words can express
that I am totally loved and accepted. Since that day I have never
again had the desire to gamble.

I think God calls us to bring that utter mercy and acceptance to
everyone we meet and to show people that no matter where they
have been or what they have done he has a heart that burns
with love for them and he has healing in his hands. St Therese of
Lisieux is the patron Saint of missions and I feel she is so powerful
a helper in this work. She said that "I will spend my heaven doing
good upon earth!" and I never do a talk now without calling upon
her to bring down the fire of the Holy Spirit from Heaven. Imagine
my joy when my great friend Br Francis who is now based in
New York, sent me as a birthday present the picture of Therese
(that I have attached to this message) which he painted himself.
It is even more incredible when you consider that until he joined
the Franciscans brother Francis had never painted before.

Please keep us in your prayers that God will reach more and more
lives with his mercy. As I was leaving a mission a few days ago a woman
in her fifties came up to me and said that this week she had made
the first real confession of her life and her best friend had also gone after
being away from the Sacrament for twenty years, she told me she
felt so happy it was like being innocent as a child again.

This week I am travelling to Texas, then Connecticut, New York and
Finally Toronto to give talks. It is always good to go back
to New York. A few years ago I was in the Bronx and I was taking
part in a retreat and because I used to smoke I went outside for a
cigarette, now this particular area was well known for prostitution
and one of these ladies approached me and asked me for a light,
as I looked into her eyes I could see a real deadness, she had given
up on anything good ever happening to her. So I told her that there
was once a fifteen year old girl who fell in love with a man, but he used
her abused her and dumped her and her heart was torn within her.
Soon after she met another man and once again she fell in love only
for the same thing to happen to her again.
This pattern continued until eventually the girl was selling herself
for the money she needed to survive. Everyone looked down on
her and judged her, but one day she met a man unlike any other,
he seemed to see deep into her heart and accepted and cherished
her for who she was, she fell to her knees before him, washed his feet
with her tears and dried them with her hair. The man was Jesus, the
woman was Mary Magdalene. As I finished the story there was a
light in the Lady's eyes, the light of hope, and I knew that she had
remembered the story perhaps from her childhood, then she said
to me "Will you please pray for me?" I have prayed for her every
day since and one day I hope to meet her in heaven.

You are very much in my heart and prayers.