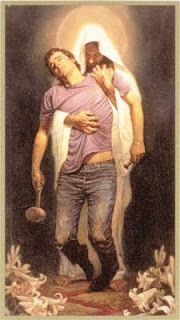 Since coming back from my travels it has been
nice to spend a couple of weeks in Ireland.
I had been looking forward to going to Malta to
do some talks but unfortunately I got a serious
dose of the flu and that wiped me out for about
10 days and I wasn’t able to travel.

Last week I spoke at a parish mission in Charlestown
Co. Mayo, the Church was packed and it was very
heartening to see many young people coming to the
mission and this week I have been running a mission
in Oldcastle Co. Meath. At both of these missions
we had reconciliation services where everyone had a
chance to go to confession, we had about 12 priests
available both nights. It was amazing to see hundreds
of people going to say sorry to God and receive his
healing and peace in that beautiful sacrament.

One girl told me how she had been no longer going to
Mass, but she came to the mission and went to
confession for the first time in over 15 years and she
said she felt so happy and had a great warmth in her
heart which she knew was Gods love. Another man told
me how when he was a young boy he had been sexually
abused and also badly beaten and as he had got older
he turned to drink to try to mask the terrible pain
he was in. He had gone to confession for the first
time in many years and he said that God had done
something special in his heart because the hardness
and coldness he had felt for so long was starting
to melt away, he also said he felt Our Lady very
close to him and she was going to teach him how to
love again.

The greatest joy in my life is to be able to speak
to the young people in schools and to tell them
truth about Gods love for them. I think God wants
to work through everyone and all it takes is for
someone to be open for a miracle to happen. A few
months ago I did a interview for an Irish Television
show called Nationwide with a woman called Mary Fanning.
Mary went away and arranged for me to speak to the
young men at Clongowes College in Co. Kildare. It was a
really blessed talk and the boys responded so well,
many of them purchased my book with their own money
and told me how God had inspired them through my story,
one of the boys was Mary’s son. Because of her openness
many lives were touched. That was a great witness to me
of following the promptings of the Holy Spirit and if
only good can come of it just go ahead and do it!

I also spoke at another school in Maynooth and the
students were equally touched. I have often heard it
said that religion isn’t cool these days, but I have
found that if you really give young people the truth
they are hungry for it. I receive hundreds of emails
after giving talks in schools and when I hear some of
the situations the young people are dealing with it
would break your heart.

I thank God for his heart of compassion which is always
seeking out those who feel lost and abandoned and
showing us his tender love and Mercy.

You are in my heart and in my prayers, please keep me in yours!