HE IS WITH US! 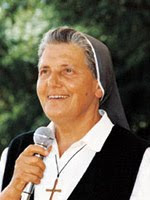 I recently travelled to Florida where I spoke at a
Conference dedicated to Our Lady, I was very touched
by the peoples prayerfulness and Faith. Also speaking
there were two lads from the Cenacolo Community
(a community of young men and women who overcome addictions by
prayer and the grace of God) who shared their testimonies
about how God was changing their lives, hopefully these had a
big impact on Anthony (the seventeen year old lad who was
spending a few weeks with me) who was coming from a very
similar background.

After this we did a Parish Mission in Southampton, it
was a great witness to me of the Faith in England to
see so many people pack the Church each night. On the
confessions evening many people went for the first time
in years and some people emailed me to tell me there
was great healing for them that night, and they had
experienced a deep peace in their hearts.

I spoke to all the lads in one school in a tough area
of Southampton over the course of two days. Many of them
contacted me by email or facebook and shared their own
stories with me, all of them were very open to God and
some had been through very similar childhoods to myself.
The thing which I noticed was that all of them wanted to
do something good with their lives and were searching
for the right direction, so please keep them in your
prayers.

I did one talk to a Church group in Kent and I mentioned
that it was wrong that Homosexuality was being taught as
an equal right to marriage in our schools, and this to
children at a very vulnerable age. After the talk I was
approached by a man who said he found what I had said
offensive because he was homosexual and living in a sexual
relationship with his partner. I said to him that I loved
him and respected him as a person, but that what he was
doing was wrong. I knew that it would be unpopular but I
said it with compassion because the truth without love
isn't the truth. During the talk I had spoken about God's
mercy and forgiveness and that he loves us in our weakness
and struggles, but even in that we need to have the courage
to stand up for what is right, and we can't change Gods laws
to suit ourselves.

I was invited to speak at a youth conference at the Sion
Community in Brentwood, Essex. As soon as I walked into the
tent where the conference was taking place I was moved to tears
by power of God's presence. I shared with them that sometimes
when I had prayed with young people in the past I had seen an
image of Jesus crying and saying to them that he never wanted
them to suffer, to feel the pain and loneliness that they had
and that he wants them to know that he is with them in their
suffering. After this many of them came forward asking for
prayer and there were a lot of tears.

Some of the young people shared with me that one of the biggest
struggles for them is purity, there is so much pressure on them
now and at a much earlier age than ever before, the pressure is
coming from all angles particularly from the media and from their
own peer group, as I was praying with one girl I had an image that
she was looking at a reflection of herself and throwing stones at
herself because she didn't like what she saw, then Jesus appeared
and took the stones from her hands and showed her how beautiful
she was in his eyes. Ultimately it is only God who can give us
that sense of identity, security and self worth that we all so
desperately need.

You are very much in my heart and prayers, please pray for me also.