"DON'T WORRY WHAT YOU ARE TO SAY" 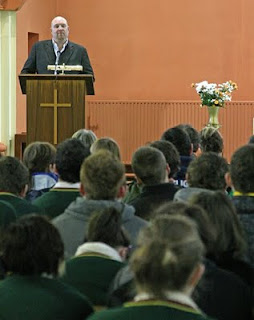 During the time of lent I have been particularly busy
with parish missions. At Berkeley road in Dublin a
woman came up to me and said "well, you've converted
me!" she went on to tell me she had been to confession
for the first time in 30 years and the following
morning she was so full of joy that she wanted to dance
her way to Church.

Next I went to Milford in Donegal for a week long mission.
It was very uplifting to see the peoples faith with the
Church being packed every night and many people returning
to the Sacraments. There were two secondary schools in
Milford, both of them put the whole school together for
me to speak to all the students, one had 400 and the other
had 700, there was a great openness both from the pupils
and teachers.

After this I travelled to Derry to speak to 250 young people
in Lumen Christi College, It was a joy to be able to speak
to them in the school Chapel and to see my old friend
Stephen Doherty who is the chaplain there.

We returned to Uddingston in Glasgow for a second mission.
I really enjoy these because it takes me out of my safety
zone and often I have no idea what I'm going to say until
I actually start speaking, it encourages me to trust God
because he said "Don't worry what you are to say, because
what you are to say will be given you" and I've noticed
that when I do this, God can and will say something that I
could never have planned and he knows every person there
intimately and what they need to hear.

I always feel God calling me to true freedom in him, not
to be afraid what people think, to truly put him in the
first place in my heart. I think it brings great joy to
God's heart when we are ourselves and real not trying to
impress anyone and it is then that he uses us the most
powerfully.

I also had the great blessing to run two confirmation
retreats for youngsters in Ireland. I found it a breath
of fresh air to spend the day with these kids, in Ireland
they get confirmed at 11 and 12 years old. At that age
they still have that innocence and freedom to be themselves.
They asked me brilliant questions and were so open to
the Holy Spirit, at the end of the retreats there was a
joyful atmosphere and they all came up and asked for a hug.
As we approach Easter it is good for us to remember that is
why Christ came, to restore lost innocence and to heal our
souls so that we would know peace and joy in our lives once
more.

I also spent 3 days in Cumbria talking in schools. This was
arranged by a lady called Judy who is in the Salvation Army.
I was very impressed by her, all she was interested in was
bringing souls to God and that they would know Gods love for
them. I was speaking in schools with all faiths and
none and I tried not to have any agenda but to speak whatever
I felt God would like to say to them. I thank God that many
of them emailed to say how much it had meant to them. On
the Friday night I did a talk at the Salvation Army hall
and between 100 and 150 turned up including some of the
kids I'd spoken to in the schools.

At that evening I met a man called Jimmy who told me that
in his past he had been a gambler and a big drinker and had
been very unhappy in this lifestyle. One day he had seen a man on
the street crying and he had went and helped the man, this
incident changed his life and he ended up becoming an officer
in the salvation army. I was interested to learn that they
promise not to drink alcohol or to smoke as members of the
Salvation Army. I told him that three members of my community
were pioneers (they take a pledge not to drink and offer that
little sacrifice for those who are addicted to Alcohol).
I think that is a good witness of love for others, but I
personally haven't felt called to it, I still enjoy a glass
of wine and the odd glass of malt whiskey. I think that is
the beauty of our faith that even though we may have slightly
different approaches God uses us all to build his kingdom
if we desire it.

You are in my heart and prayers, please keep me in yours.