"SCRATCH BENEATH THE SURFACE" 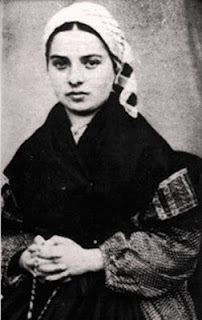 
She scratched beneath the surface to find the miraculous spring of water at Lourdes.

The last few weeks have been really blessed, I went
to do a talk in Wheatfield prison in Dublin. The men
that I spoke to were very open and most of them took
a copy of my book. They had some really good questions
and I could see that they were searching. It was
heartwarming to hear from some of them that they were
praying everyday and trying to use their time in prison
fruitfully.

One man that was in the prison was a nephew of a friend
of mine, I had met him a few years previously and he had
been badly injured by some other men and he was looking
for a way out of the lifestyle he was caught up in. At
the time I encouraged him to go to the shrine of knock
and make a good confession and start afresh with God. He
told me he had done this and after the confession he had
wept because he felt God's compassion and mercy for him.
He told me it completely changed him and he hadn't been in
trouble since. He was in prison for an offense he had
already been charged with before we met. I could see the
light in him and the hope he had for the future.

Following this I travelled over to Bournemouth to speak at
a dinner given by The Full Gospel Business Men's Fellowship.
It was a lovely evening with about 60 people present from
all different Christian denominations, it was great to chat
with them afterwards and to hear the way God has been working
in their lives also.

After that I had the opportunity for a few days retreat in
Devon where I really felt God calling me to go deeper with him.
A bit like when St Bernadette was told by Our Lady to drink
from the spring at Lourdes. At first there was just a muddy
patch on the ground and when she began to scratch beneath
the surface people thought she was mad, but she didn't give
up and in the following days water started to flow from the
mud where Bernadette had been digging. From this water
flowed a spring in which people started to have miraculous
healing experiences, and this remains one of the great
attractions of Lourdes to this day. In the same way I felt
I had to scratch beneath the surface and spend some time
listening to what God was trying to say to me. After this
I felt refreshed and renewed for whatever the Lord has in
store for the coming months.

From there I travelled to Our Lady's shrine of Walsingham
where I did a few talks at the youth camp and also did a
workshop on my experience of the healing of the wounded
child within. This is a process that had happened to me
over the course of several years where God was healing the
wounds from my childhood and setting me free to be able
to love. I remember about eight years ago I woke up one day
and felt totally free within, I though that this peace
couldn't possibly last but I can honestly say that from
that day til this, it has never left me. I have recently
finished my third book called "Journey To Freedom" which
among other things tells of that journey which we are all
called to. The book will be available in a couple of months
time.

After Walsingham I returned to Ireland where I was invited
by the Franciscan's of the Renewal to Moyross, an area in
Limerick with a notorious reputation for gangs, where I shared
my story of how God had transformed my life from violence
and despair, to an incredible adventure in trusting him.
I was told that many of those listening are still involved
in that same lifestyle and I pray that God would touch their
lives with his grace.

Finally you are very much in my heart and prayers, please
remember me in yours.