GIVE UNTIL IT HURTS! 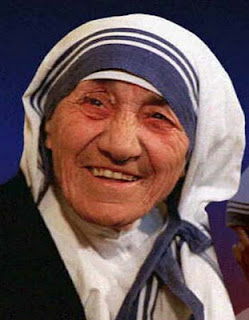 Hello everyone
I hope you are well and at peace
Just before Christmas I was running a Parish mission
at Ayrfield in Dublin. There I met a man who had been
very badly betrayed by some people he trusted, because
of this he found it very hard to trust anyone again. But
because he had read my book he was willing to open
up to me, he wanted to go to confession but he was

scared, so I introduced him to Fr Tom the Parish Priest
who has an incredible gift of loving, he was able to unload
all the burdens he was carrying to him and afterwards he
was deeply touched by the love of God in the healing service.
Fr Tom said that the whole mission was worthwhile just
for him.

Next I flew to Los Angeles and as I was going through
border control entering the United States, the man who
was checking my passport said "You seem to have visited
a lot of different countries, for what purpose" I told him that
I am an evangelist and I write books. "What kind of books?"
was his reply, so I told him I used to be a Gangster in
London until God changed my life.  He then asked "did
you spend time in prison?" I said "I'm not going to tell you!"
(there was always the possibility that he wouldn't let me into
the country with my record) we both laughed and he said
"I love books like that!" so I gave him a copy, and he cleared
me to enter country. I had to smile because only God
could have arranged such an incident.

We arrived in LA on Christmas Eve and we where driving
around looking for a place to eat, but of course everywhere
was full, I pulled up outside a Polish restaurant, Niall
went in to see if there was any tables free and while he was
waiting he felt inspired to give one of the waitresses a miraculous
medal and she was so delighted, it obviously meant a lot to
her. Even though it was very busy they cleared a table for us
and we had a lovely meal and despite being half way round
the world they made as feel like a part of their family in the
restaurant. At the end of the meal I gave the same waitress
my rosary beads and she was very moved and just gave
me a big hug, she had a deep faith in God and he seemed
to be showing her on Christmas Eve how precious she was
to him.

Whilst in Los Angeles I spent some time with Paul Kelmenson
who you might remember is a big producer that would like
to turn my book into a film, his mother who is an actress herself
joined us and we had a blessed time together. We discussed
how difficult it is to give witness to God in an environment like
Hollywood. In my opinion he is a great witness as is his mum.
We went to Mass together in Beverley hills in the Church where
Frank Sinatra's funeral took place and where many of the stars
have worshiped God.

We then traveled to Mexico City to visit the shrine of Our Lady
of Guadalupe, years previously I had consecrated my heart to
Mary before this very image and it was always my desire to
visit the shrine. During Mass in the Basilica, a family sat beside
me who were obviously very poor and had probably walked
a long way to get there as they were covered in dust.They had
a young son, I felt Our Lady ask me to give the little boy some
money, as I did so I told him "this is for Christmas" and he lit up
and he gestured that he would pray for me, I said I would do
the same.

After flying back from the States, we departed directly for
England to run two weeks of  retreats at a school
in Canterbury, even before we started we were jet lagged.
It was a hard slog and we had to be up at 5am each morning
and there were also talks in the evenings, after having been
in the school all day. We had a day off scheduled, but lo and
behold talks were arranged on that day also. By this stage
we all felt tired, but then the words of Mother Teresa came
back to me once more "Give until it hurts". God asks us to
be generous, especially when we don't particularly feel like it.

Each day of the retreat the students had the opportunity
to go to confession and over the two weeks literally hundreds
of them took advantage of this sacrament of forgiveness and
there were a lot of tears during these services. Many of them
emailed me to tell of there experience of meeting Jesus in a
very real way and they said it had changed their lives. Some
days the demand for confession was simply too great for the
number of priests we had.

On the final day of the retreat we had a school Mass and
Bishop John Hine presided and eight other priests concelebrated
with him, these had come because they had been so moved
by hearing the young peoples confessions and by the retreats
during the fortnight we were there. This was a truly joyful end
to the mission and the words of scripture came to me "Those
who are sowing in tears will sing when they reap."

Here are a couple of the emails the students sent after the retreats;
one young lad wrote "Thanks for what you did at the school today,
I felt a big emptiness in me for a long time but I was afraid to tell
anyone, God has filled that emptiness and made me feel loved."
one of the girls said "I just wanted to email and say thank you for
the mission it really made me feel better about being open about
my religion, I used to get teased but your retreat helped me realise
I shouldn't hide who I am, so thanks." Finally another girl expressed
"After I went to confession at the retreat today I felt a wave of relief
pour out over me, and I realised what a good day it had been as I
had found a way back into Jesus. The miraculous medal you gave
us is on me, and I doubt it will come off, and I have just done a decade
of the rosary, I haven't done one in years, again after it an overwhelming
sense of peace came over me, I'm also going back to church on Sunday.
I've realised what a beautiful place the world is and how everyone fits
into that beauty."

I really believe the more we give the more we receive and God is never
outdone in generosity, even though I'm tired I know how much God has
used his broken instruments.

Rich Mullins the famous christian singer/songwriter once said, "Unless we
fall into bed each night exhausted, from bringing souls to God, what right
do we have to say we are christian?"