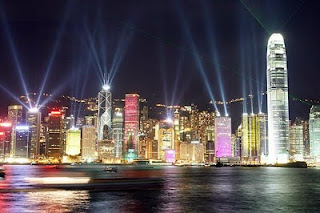 After the summer the Parish missions began again and I
spoke in Durrow, Co Laois then two more missions in
Ballyduff and Causeway in Co. Kerry. The Parish priest
there said that many people came back to confession after
years away including one man who hadn't been for forty five
years. The missions are such an opportunity for people who
have drifted away for whatever reason to make a new start
with the Lord and it is beautiful to see the joy on their faces
by the end of the week.

Next I travelled to Hong Kong where I spoke in a school and
a prison. The priest who took me to the prison was an amazing
man. He had already been kicked out of China unjustly for
helping the poor and he lives very very simply like the poor
whom he ministers to. His main work is on the streets with
drug addicts and prostitutes and it was a real blessing for
me personally to go onto the streets to pray over the drug
addicts with him. One of the people he works with is Jackie
Pullinger who wrote the book Chasing the Dragon. In the prison
itself I did a talk to a group of men including triads
(Chineses gangters) and as I was speaking one of the men broke
down crying in front of me.

One of the things this Priest is doing is bringing Chinese bibles
into the prison, many of these men will never have seen a bible
in their lives and I know from personal experience that when
you are locked up you are often looking for something to read.
The Priest and all the families I met during my stay were an
incredible witness to me of faith and love in action and were
an inspiration to me that I will never forget.

After this I travelled on to Sydney. Within two hours of landing
I was speaking to students at a Sydney university. As I shared
the story of a friend of mine called Lily who when she was 7 years
old was abused for two years by a friend outside her family.
There was a part of her who really hated this man and by the time
she was 16 years old she was very promiscuous, drinking too much
and taking drugs. When Lily did come to know God’s forgiveness
and love and started living her life for God I noticed that there
was a real sadness in her at times and I asked her one day where
she thought the root of this sadness was. She prayed about it for
about a month and when she got back to me she told me that there
was a time just before her sixteenth birthday that she went to
a hall with ten boys from her school and let them do anything
they wanted to her and it was a few days after that she tried to
take her own life. I prayed with her and told her to go back into
that situation and in her heart invite Jesus in to it. As I prayed
with her she broke down crying for a long time and when she composed
herself she told me that Jesus came in amongst all that shame and
wrapped a white cloth around her and kept repeating ‘My innocent
little seven year old girl’. At this One of the students I was speaking
to began weeping and I felt she was receiving a deep healing in her own
heart.

After this I moved on to Brisbane and spoke at another university. I
thank God to be able to do this work and ask for your prayers because I
will be speaking at many schools and parishes in different parts of
Australia. One of events that I will be speaking at is the 'Share The
Holy Spirit' conference in Sydney. This will take place from Friday
October 1st to Tuesday October 5th at the Sevants of Jesus centre,
15 Park Road, Seven Hills, NSW 2147. To find out more about this
conference check out this website www.servantsofjesus.org

Finally just to say you are very much in my heart and prayers.