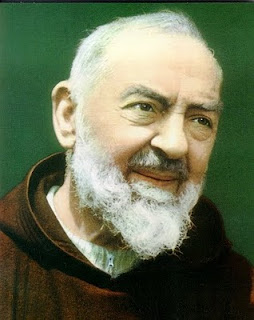 After returning to Ireland from the tour of schools in England
I was struck by how many of the young people who contacted me
by email or on facebook were deeply searching for God in their
lives. Some of them have been through very difficult times and
have had to cope with emptiness, loneliness and rejection.
A few of them told me that when they were younger someone had
said to them "Remember you are never alone, God is always with you",
or words to that effect. At the time these words hadn't meant much
to them but at some point they had started to pray and speak to
God and they had started to believe for themselves. One girl
told me that she took the rosary pack we give out to the students
home with her and even though she isn't a Catholic she prayed it
for the first time in her life. I know from my own life that
prayer is the key, there are no short cuts, we have to spend
time with God and let him fill any emptiness with his love
and peace and far from it being wasted time I have always seen
that my days have been fruitful when I have invited God into
every situation.

The first parish mission of the new year was in Meadowbrook,
Dublin. We were inviting the people from weekend Masses to
come to the mission and a man came up and said that about
2 years ago he had been channel surfing on TV looking for
something interesting to watch and he came across me sharing my
testimony on EWTN. He said it had made him think about his life
because he very rarely went to church, so much so that he had
emailed me to find out if he could come to see us, however at
that time we weren’t doing a mission anywhere near him so it
never happened. The reason he came to the Mass this particular
weekend was that his son was making his confirmation and was
doing a reading from scripture. When he heard us speaking at
the mass he said he nearly fell off the bench in surprise. He
not only came to the mission but brought a large group of people
with him. This just showed me the power the media can have in
reaching out to people who are searching in their lives and also
how perfectly God arranges all our circumstances if we give him
permission.

That same week I travelled down to Waterford to run a couple of
one day school retreats. For both retreats we had between 70 and
80 seventeen year old boys. At the end of each day we held a
Eucharistic healing service with them in the chapel, the teachers
said they had never seen the lads so reverent and I think God
really touched them in a way they could understand. One funny
thing that happened was during the second day 10 of the boys who
had made the retreat the day before returned to do it again because
they had enjoyed the day so much, the teachers were pretty surprised
by this and because they thought only good can come from it, they
didn't stop them. Once again I think prayer is the key, before any
talk or retreat we would pray and intercede for those we are meeting
and ask God to remove any blockages to his grace and also we write
to every contemplative order in Ireland and the UK and ask them to
pray for our work.

The next mission was in Dromahane, Co Cork. The Church was absolutely
packed with people from all age groups, it was quite literally
standing room only. After one of the nights a priest said he had
heard confessions the whole night through, until long after the
service had ended and for most of them it was their first time to
confession for at least 10 years.

St Padre Pio always used to say "Pray, hope and don't worry" to do
our best and leave the rest to the power of God. I know for me these
last few weeks the Lord has been reminding me to put prayer in the
first place in my life and everything else will work out in God's
way and in God's time.

Please keep me in your prayers this week I'm speaking in schools
and prisons in Milwaukee, Wisconsin and on Saturday 19th February I
will be speaking at a conference called "Men of Christ" held at the
Milwaukee theater. You can find more details on www.menofchrist.net

Please keep me in your prayers and know that you are in mine.